In Memory of Our Beloved Founder 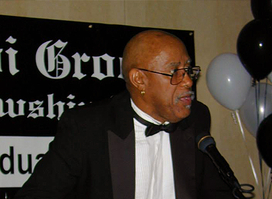 In Memory of Our Beloved Founder

Our beloved Founder, John E. Conquest, passed away on Friday, July 12th, 2013.  A native of East Patchogue, New York, Founder Conquest was born on January 5, 1940 on what was then known as Gallo’s Duck Farm.  He was the youngest of nine children born to Dave and Minnie Conquest.  Founder Conquest graduated from high school in 1957 and attended what was then Morgan State College on a football scholarship.  He also wrestled and played basketball at Morgan.

It was there that he met the other Founders and gave birth to Groove Phi Groove Social Fellowship, Inc. on October 12, 1962.  During the early years, when the Fellowship had not yet gained acceptance on campus, Morgan’s President, Dr. Martin Jenkins, knocked Founder Conquests’ Groove Phi hat from his head to the ground.  Fellowman Conquest slowly reached to the ground, picked up his hat and firmly placed it back on his head, at which point he told Dr. Jenkins, “You can knock Groove from my head, but you will never be able to remove it from my heart.”